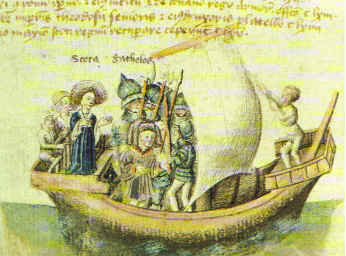 Founded on 28th April 1937, but can trace its history even further back in time, starting with Queen Scotia an Ancient Egyptian Princess who was exiled from Egypt with the Scoti people and thus traveling to northern Europe and creating the Kingdom of Scotia and becoming Mother of our people. - Scotichronicon

In 1937, Scotia was aimed to be a nation in a time where there was real concern and worry about the politics of Europe and while on military tour with the Royal Navy William of Scotia set foot on an unclaimed region of Antarctica and declared the land be called Scotia. This was later incorporated into an area declared by Norway as Queen Maud Land in 1939 (The North-East Region).

The citizens of Scotia were of Scottish decent and living in Scotland and so a small community was established in the hope that they could build a new life in Antarctica or at least in the surrounding islands due to weather conditions, hence the name Scotia after the Scotia Sea.
However, this was abandoned when in 1939, World War 2 started and all the men were drafted into war, leaving the women behind to take on the jobs that the men had previously taken.

The ideals and values of Scotia were never more important than during the war when Community, Duty and Honour were tested to its core, life was very hard, and food was rationed. Scotia became a haven for the community, and they would talk and dream about their new lives in their new land, even the men dreamed about this while serving too and the Book of Scotia was written by William outlining the nationhood.

Sadly, William died in 1941, along with his men while fighting tyranny and the dark forces of the Nazis and Ann became the Regent of Scotia until Prince Charles came of age in 1955.

Scotia after that was very small with only the Princely Family and a handful of citizens left as many of the community had died or moved away and Scotia was unable to be settled due to restrictions issued around Antarctica.
​
In 1995, Charles I died and his son Charles II took the throne at the age of 15 years old but it wasn’t until his 25th birthday in 2004 when he received the last of his fathers Will and Testament receiving The Book of Scotia that caused a new invigoration and rebirth in the Principality of Scotia to what it has become today.